Ron Wulf is a former member of the Canadian Forces and will be part of the Aftermath group traveling to Costa Rica August 24-29 for the #Recce Trip. Ron and his wife Susan were deployed throughout their career and suffered from PTSD following traumatic experiences they had during their various postings. In an interview with Camp Aftermath, Ron explained how PTSD has affected him and his wife, and what he hopes to accomplish by joining Camp Aftermath.

Camp Aftermath: Tell us about your upbringing – where did you grow up?

Ron Wulf: I grew up in Holland, I was born in Rotterdam. My parents moved to Canada in ‘67. I had a semi-normal childhood until we got to Canada. When we moved to Southern Ontario I was the foreign kid with the German last name, and there were still a lot of kids whose parents had fought in WWII. Southern Ontario in the 60s was white and I was the foreign kid. I was picked on pretty badly. I learned English very quickly because it was a survival mechanism. That was one of the first experiences I had with how people treat people that are different.

In ‘76, I joined the reserves after we moved to Toronto. In part, it was the typical teenager cool thing to do, but I had been exposed my whole life to stories of my parents who had survived WWII. They had lived in occupied Holland. So I had a real sense of the dangers of Fascism and stuff like that because they had survived that and I had a lot of family members who had died in camps. I always had a strong sense of the honour and the service of the Canadian military, largely because of the fact that they liberated the country I was born in. At the time it was still the Cold War and there were bad people out there and I just wanted to do the right thing. There was a sense of service. That was really the driving force that made me think that I wanted to do something. So I joined the infantry and did that until I met Susan. But it wasn’t very popular with the family because one of the reasons my parents had left Holland was so that I wouldn’t have to do obligatory service. 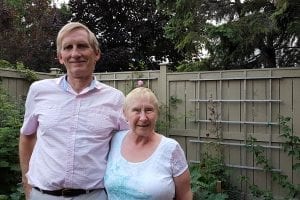 Ron and his wife Susan at their home

I ended up transferring from the reserves to the regular force in ‘79 and we moved to London, Ontario. It wasn’t a very pleasant posting, but after not even a year they had a requirement for people to go to Bodden, Germany and so I came home one day after Christmas and asked Susan if she would like to move to Germany. A week later I had a posting in Germany. We spent four years there; four absolutely wonderful years.

CA: When did your PTSD start?

RW: We were in Russia for 3 years, ‘92-‘95. During my time in Russia I ended up going to all over the region, but I would say Moscow is still the biggest culture shock I’ve very experienced. I think it was because I wasn’t expecting it to be that profoundly different. I was the Assistant Attaché. The whole place was in flux, it went very quickly from Glasnost and Gorbachev to what can best be described as anarchy. There were a few years where Russia was in a real state of anarchy, and that’s when we were there. A lot of stuff that happened contributed very directly to my own PTSD issues. I was going on a lot of work-related trips to a lot of messed up places. That’s the best way of putting it.

One of the trips that I did was working as the Canadian Forces liaison with the International Red Cross, because the Canadian military had lent a bunch of 707s to fly-in medical assistance to the more remote Russian areas. There were real shortages of medical equipment and supplies and so the Canadian Forces flew a lot of that in, and when they did the reconnaissance for that I was basically the person who was going in and assessing the airfields to see if they could land there, what the security situation was on the ground. So I was going to all these places where people were starving and had zero medical care, while people in Moscow were driving around in limousines. It was kind of depressing. A lot of the trips that I ended up making, they had an impact on me.

Looking back on it, very early, I was experiencing symptoms, but in terms of realizing what was going on, I didn’t at all. By 2003 though, a lot of those chickens had come home to roost. By that stage I was drinking more. I was engaged in high-risk behaviors. I wasn’t looking after myself at all, and I was alienated, isolated. I would come home and hide up in our office for hours. I was disassociated. That wasn’t me. I mean it just wasn’t. I had become hyper-vigilant, hyper-critical, hyper-everything.

CA: How did your treatment for PTSD start?

RW: I went to speak to the psych on the base, and he sent me off to an occupational stress injury clinic, and they came to a pretty quick diagnosis that I was suffering from depression and fairly nasty PTSD.

It took me a visit or two, but I started cognitive behavioral therapy and just started talking a lot. There was a while where I thought you know, ‘what the heck use is this, I mean what is a hot shower in the evening going to do for me? This is dumb. This is stupid.’ Again, I was being hypercritical of everything. I thought this isn’t going to do anything for me.

I mean everybody’s PTSD is unique, but there are commonalities of experience. So if you’ve got a group of ten people that have experienced some of the same operations in Afghanistan or something like that, then they’ve got a common bond there. But I didn’t have that. I really didn’t have that. I did try to get into some of the groups in the base, but we had nothing in common. A lot of times PTSD tends to be a unique thing. And the straw that breaks the camel’s back is so different for everybody.

I am still getting treatment. I think now though we’ve got a fairly healthy box of tools now so we can say it’s time for us to go sit and meditate, or it’s time for us to go for a walk. We have personal interventions that we can do on our own. In my case, I guess I have had a harder time healing from it all. To a certain extent, I kept exposing myself, getting indirect exposures, and I guess I backslid in terms of taking care of myself a couple of times; forgetting the fact that certain things were triggering me. I have to keep a pretty tight grip on the kind of stuff that I do.

CA: Why did you decide to become involved with Aftermath?

RW: I first heard about Camp Aftermath when I went to sit-in on one of Farid’s presentations and he and I started talking and realized that we had an awful lot in common in terms of our experience in the military. I was just drawn to it.

One of the things that I did when we got back to Canada, which was in part a high-risk behavior, but in part my way of giving back, was that I joined the local fire department. It wasn’t until after I’d been doing some of my treatment that I realized that the reason I was doing that was because I was helping people, and it was something positive. It was giving back to the community. And again, that’s one of the reasons why I joined Aftermath on this, was this need to give back.

When we moved to Ottawa – no more volunteer fire department – but there was still sort of that feeling of emptiness and Susan and I had been talking about getting back into volunteering, but we just hadn’t been able to find anything. And then talking to Farid, and honestly it wasn’t a conscious thing, it was just: I’ve got to do this. I’ve got to do this. This is just so perfect in so many ways. The philosophy that Farid has of healing by learning to reintegrate with the community and by giving back is exactly the experience that I had, and it’s exactly what I need. 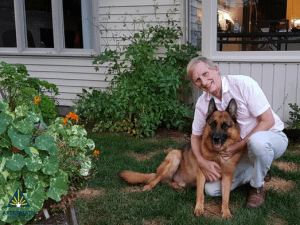 Ron and his dog Ramsay

You do hit a place in your healing where you’re OK with yourself. The problem is, over the time of being sick you’ve gotten yourself isolated and you’ve withdrawn from the community in a lot of ways. Part of PTSD is alienating yourself from others and isolating yourself so you’ve got to rebuild those links. Learning how to re-engage with the community and learning how to give back is, I think, a huge part of the whole healing process. So for me Aftermath, and this trip, is continuing my healing process, but I’m also hoping to be able to help other people get to that stage of their healing as well.

It’s such an important part of the healing to get people back into the community; helping people to be members of society again.

You can read Ron’s blog post about the #Recce trip here.