Camp Aftermath is built on the idea of using philanthropy to generate “positive anchors” to replace the “negative anchors” of painfully haunting past experiences that give rise to PTSD.

To accomplish the goal of Camp Aftermath, the Aftermath Association leadership and members, in collaboration with sister organizations, have built an itinerary of activities and interventions to give Camp Aftermath participants in Costa Rica the chance to engage in self-healing through active philanthropy.

In keeping with Aftermath Association’s tradition of careful and meticulous planning, we recently carried out a dry-run of the itinerary in order to gain first-hand experience of the planned activities, and to identify and iron-out any details for the rotation (Roto 0) planned for early 2018. We decided to carry out a 5-day reconnaissance trip (“recce trip” in military lingo) in which myself, volunteer James VanWort, and participants Ron and Susan Wulf would test the itinerary. We were able to compress the two-week itinerary into five days, and the results were remarkable.

The Cast of Characters:

This was my second official trip to Costa Rica with friends/volunteers/participants with the goal of turning our dream of Camp Aftermath into reality. James VanWort is a friend, colleague and military veteran. This was also James’ second trip with me to Costa Rica, which speaks volumes to his dedication and passion for wanting to help military members and first responders suffering from mental anguish. Ron and Susan Wulf, who, between them, have more years in the military than I have been alive, and both suffer from PTSD, graciously volunteered to be our first participants to try out our itinerary. Gail Nystrom, founder of the Costa Rican Humanitarian Foundation , has dedicated over 45 years of her life to providing charitable aid to the people of Costa Rica, and she acted as our guide throughout this trip.

Our trip began in La Carpio, a remote section of the Costa Rican capital, San José, between two very polluted rivers and next to the city’s massive landfill. This is where thousands of refugees from the Nicaraguan civil war of the 1980s and 90s have settled. Gail has for the past decade made it her life’s mission to improve living conditions in La Carpio. 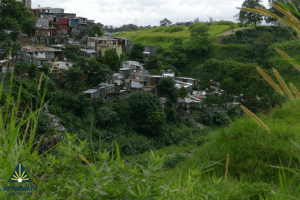 All of us were apprehensive as we drove into this area, both for security reasons and also because I feared that this type of poverty would actually trigger our participants’ haunting memories. All fears fell by the wayside as soon as we drove in and the local population saw Gail in our vehicle. Everywhere we drove, we were met with warmth and smiling faces.

I watched the fear and anxiety fall away from Ron and Susan as they began to interact with the children at Gail’s headquarters in La Carpio. There were smiles all around as we all began to comprehend the difference we could make and how it would result in our own healing. We spent the day there and toured the whole region. We saw what Gail’s foundation had done to help the people of La Caprio and discussed how Camp Aftermath participants would build on that.

The next day, we drove down from San José to Uvita with frequent random stops along the way. Whether it was a fruit stand where we tasted amazing exotic fruits or stopping at a bridge near Jaco to see the terrifying crocodiles resting below, this day was action-packed. 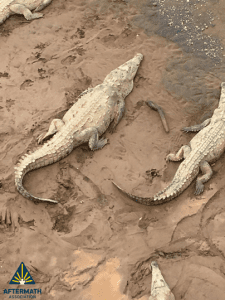 The look on people’s faces when I bring them to Costa Rica and they experience the security and freedom of the country never ceases to amaze and delight me.

The Costa Rican experience with Camp Aftermath is to be an authentic one, where participants and volunteers will be eating and residing together with the local population. This is to gain insight into the “Tico” way of life and take away some of their more relaxed, healing mindsets which have made them a blue zone country. Costa Rica, despite being a third world country with third world problems, is one of five countries where, according to studies conducted, people live longest and are the happiest.

During the next several days we bounced southbound down the Pacific coast and visited two other schools built and operated by Gail and her foundation. We also stopped at various deserted beaches and waterfalls visited mostly by the local population.

On day four, we made our way into mountains inhabited by tribal peoples where we were welcomed by the Boruca tribe. We witnessed their healing rituals and ceremonies which focused on re-living one’s anguish and traumas, thereby conquering their pain and being reborn stronger. We witnessed an amazing river ritual which can only be described as breathtaking and a once-in-a-lifetime experience.

On our second-to-last day, we made it down the tribal mountains back to San José. The scenery and climate kept changing as we climbed down one mountain and up another, with lush green vegetation as we entered the cloud forest, dropping temperatures and the tall trees turning into shrubs as we climbed above the clouds. We made our way back to San José where we, much like our future participants will do, took the last day to relax at a volcanic hot water resort. It was there that we all started to comprehend what we had just accomplished.

Those five days felt like weeks, and we had experienced everything that will take our future participants two weeks to see. The conversations were inspiring; questions were answered, but our greatest achievement was the reassurance that our Recce participants had reacted as we had hoped they would. Both Ron and Susan felt the power of active philanthropy and were more motivated than ever to make it a way of life, rather than an isolated experience. Camp Aftermath is not to be a window of solace, it would aim to be a way of life. 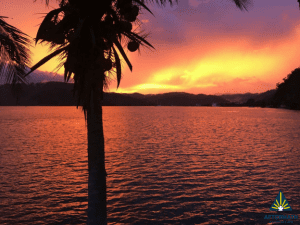 None of this would have happened without the efforts and contribution of our volunteers. Véro Bérubé, Jesse Davies, Aldo Visaggio, and James VanWort played crucial roles in the success of this trip. Our sister charity, CHFC, and its leader, Gail, are our ears and eyes in Costa Rica, and we will forever admire and be grateful for their projects in bringing hope to the less fortunate in that country. They are and will continue to be, Camp Aftermath’s partners, guides, and role model.