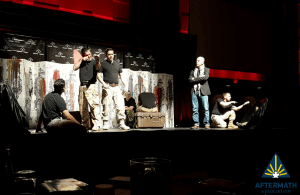 The proposed meeting was scheduled to last an hour, but what started out as a simple meet-and-greet turned into a full-day adventure. Véronique and Farid were expertly hosted by the doctors: they met countless mental health experts from the Veterans Transition Network (VTN) and saw Contact, Unload, a theatre show featuring the stories of four Afghanistan veterans who participated in VTN’s unique form of therapy by re-enacting their previous traumas to experience post-traumatic growth. Farid and Véronique ended the evening at an event hosted at the Movember headquarters. 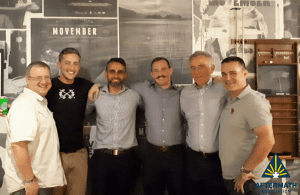 Farid with the Contact, Unload actors and Dr. Westwood (second from right)

“It was an honour to share the Camp Aftermath message with so many mental health experts,” said Farid. “We got to sit-down and receive feedback on our ideas from renowned doctors, such as Dr. Mike Dadson, Dr. Duncan Shields, and Dr. Belinda Seagram.” Véro and Farid also shared findings from Camp Aftermath’s most recent reconnaissance trip to Costa Rica, where volunteers took two participants to gather data and finalize the logistics for #Roto0.

As Dr. Whelan notes in his highly-acclaimed books, the sense of purpose that former military members crave following trauma, is becoming recognized as an essential step in recovery. Dr. Whelan echoed this sentiment at CIMVHR in an interview with the AA Executive Committee:

“One of the things that we’ve seen when a soldier, male or female, is diagnosed with Operational Stress Injury – and that could be depression, it could be Post-Traumatic Stress Disorder, it could be another anxiety disorder – who they were, the reputation they had, the identity they had in uniform, is gone,” he said. “But their sense of having usefulness in their families or their communities very often doesn’t even gain much attention. They are just so focused on symptoms. They are so focused on controlling themselves.”

In line with the philosophy that a military member’s sense of purpose is found through service to others, Camp Aftermath aims to provide a way to regain that feeling through a series of activities beginning with a philanthropy-focused excursion to Costa Rica. There, participants will be enrolled in a vast array of volunteer activities with local charitable organizations. Following the rotation to Costa Rica, and with Camp Aftermath volunteers’ support, encouragement and follow-up, those charitable acts are expected to continue after participants return to Canada. In this way, Camp Aftermath will pave the way for participants to give back to the community, and to rediscover and redefine themselves as proud and independent men and women.

Dr. Whelan firmly believes that with the right balance of holistic treatment methods and group therapy, Camp Aftermath’s special ingredient of active philanthropy can serve as a novel way to assist those suffering from PTSD: “The idea of giving back and contributing to society is a wonderful way of re-establishing connection to the community.” 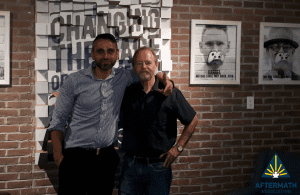 As a result of this fantastic visit, Dr. Whelan has joined Aftermath’s Advisory Board, and Dr. Westwood and the VTN are in talks with the Aftermath Association on how to create an optimal itinerary for future participants to benefit from Camp Aftermath’s focus on active philanthropy as fully as possible.

A clinical psychologist, Dr. John Whelan has spent his career working with serving and retired members of the Canadian Armed Forces. A veteran himself, Dr. Whelan spent nine years in the Royal Canadian Navy during the Cold War. In 2004, he established a private clinic for the treatment of complex PTSD in military personnel and developed a group therapy program for veterans to help foster peer support networks. Dr. Whelan has also written three highly acclaimed books, most recently, Narcissus Called My Name: Heroes and the Cost of Specialness.

Dr. Marvin “Marv” Westwood is Professor Emeritus of Counselling Psychology, in Educational & Counselling Psychology, and Special Education at the University of British Columbia. His research focuses on development, teaching and delivery of group-based approaches for counseling clients, and men’s psychological health. He developed the UBC Veterans Transition Program to help promote recovery from war-related stress injuries, for which he received both the Queen’s Golden and Diamond Jubilee Medals in 2005 and 2013.

We’ve put together something BIG