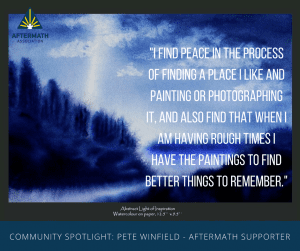 Camp Aftermath: What is your military background?

Peter Winfield: I joined the reserves when I was in university, and then after when I finished in 1989, I joined the regular force with an armoured regiment in Petawawa, ON. My cumulative time was over 12 years. My military service included the Dragoons; I was there during the time that we sent people to Cambodia for the de-mining. I didn’t go, but I sent my guys. We also trained the airborne regiment, as well as guys who went to Somalia. I was also there during all the hazing that was going on at Petawawa that was in the news. I deployed to Bosnia in 94’-95’, which was probably the worst time for me, because that was before the Peace Accord had been signed. It was over that Christmas when we had over 55 of our guys held hostage in Bosnia. I myself was held, a couple of times.

CA: When did you first realize you were experiencing symptoms that might be PTSD?

PW: It was actually my friend, retired Lieutenant-Colonel Rob Martin, who said, “Pete, all that anger is not normal.” And anger was certainly a big part of it for me. In the military, especially in the combat arms, anger is normal; it’s how you get stuff done quickly. But there is this blur between how you get stuff done at work, and how you bring that home with you outside of work. I didn’t draw that line; most of us didn’t draw that line.

One of the other symptoms is isolation. But I didn’t really think of it as isolation at the time. I was just doing my own thing, but looking back now, it wasn’t in a healthy way. And then after Rob had pointed it out, I got the diagnosis. I went through the Veteran Affairs process, and my initial treatment was all through Veterans Affairs. At first I received treatment through the Operational Stress Injury clinic at the Royal Ottawa Hospital in Ottawa. I have been through a couple of programs since.

CA: Why did you start to open up about your PTSD?

PW: I’m being a lot more open about my PTSD now, and part of that decision was just starting to explain it to my office, but I also work with a counsellor and offer my experience for her program. I do this because I have several perspectives. Not just my military background, which a lot of people [outside the military] don’t really deal with that perspective or those types of extreme situations. But I think because I’ve been pushed to the extreme, I also sort of know what the middle ground looks like. I know how subtle PTSD and its related conditions like anxiety and depression can be, so I think I can relate to people who have been exposed to traumatic experiences or are exposed vicariously through their work. Sometimes PTSD, depression, and anxiety can feel subtle, it may take time before you notice how differently you respond to things from other people and I think I can really relate to this.

CA: What do you notice about your long-term PTSD treatment now that you are further along in your life?

PW: It’s different for everyone. It’s hard at first, but I think a huge part of it is you have to be at a place where you recognize that you need help. And then, you have to be at that place with help, and be able to recognize what it is that you need. And I think that’s a huge challenge for so many people. It took me a long time to realize that I needed help. It took about two years after I sought help at Veterans Affairs.

In addition, up until about a year ago, I had always avoided group therapy. I didn’t do group work. I didn’t want to talk to other people. I just wanted to do it one-on-one and then have it be that. So there was a bit of a control aspect to my treatment at first for me, too. This year, though, I went on a group program with Project Trauma Support (PTS) with my friend Rob in Perth, ON. Participating in a group program was a huge step forward for me. I feel that long-term PTSD becomes a cycle you adapt to, where the symptoms go through ups and downs, sometimes you don’t have nightmares or anxiety, and sometimes it’s just a profound emptiness that never goes away; and the challenge is to learn how to live with that. 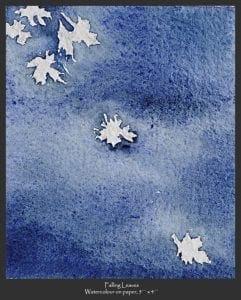 CA: Can you talk a little bit about your art and The Colour of Water? How has your art helped you throughout your experience with PTSD?

PW: I have been painting and taking photos on and off for most of my life. When I joined the army, I stopped for about 20 years, and I started again a few years ago. I am self-taught and usually use art as a way to escape and find peace for myself. It is something I don’t have to think about. I find peace in the process of finding a place I like and painting or photographing it, and also find that when I am having rough times I have the paintings to find better things to remember.  I go on trips to paint like to Algonquin Park, Bon Echo Park, and Hawaii. Unlike art therapy, where you use art to recall past experiences and try to understand them better, I use art to find peace and envision a better future.

CA: How are the experiences of military veterans and first responders with PTSD similar?

PW: There’s a lot of similarities in the way we think, and also in the way we interact with each other. I think in some ways we connect through just the idea of putting on a uniform. And it’s not just the act itself; the reasons for doing so are very similar. Be it an EMT uniform or a police uniform – there’s a sense of a greater purpose that’s a big part of why we all do it. I think another important thing we all have in common is the way we think – operationally, focussed, assertive – that’s also very similar.

But there are some differences. I think military life knits us into a tight group, and it’s also a much larger group. I think there’s a little bit of tension maybe between the communities because the military has a much bigger support network than some of the first responder communities. But first responders need just as much help as everybody else. So there are differences in the ways our communities take care of us, and that creates a little bit of tension. And yet, the nature of the trauma is very similar. Our responses are all the same. And once you get past the war story phase, once you get into that healing phase, we’re all on the same track.

CA: What did you think when you first heard about Camp Aftermath and the idea of using active philanthropy to support the long-term treatment of PTSD?

PW: A year and a half ago, when Farid was first thinking about starting Camp Aftermath, I thought it was a great idea. One of the things about his philosophy, and behind similar ideas about healing and trauma, that I think really works, is the idea of service to others. I think that’s really, really important. And that’s why I like what he’s trying to do.

I think this idea of service is related to spiritual growth. Without getting into theology, there’s an emptiness in a lot of us that you can’t fill yourself which only comes from helping others. It’s almost like vicarious growth. Using myself as an example, I do not honestly remember the last time I was really happy. Even though I’ve gone to some fantastic places like Hawaii for vacations, I can’t remember the last time I was happy. But I know what it looks like because I see it in my daughter. I think that’s why service to others is so important. To see other people who are struggling, and who you can somehow help, and then to see how helping them improves their lives. And you can reflect that in your own life.

You can’t go straight to the spiritual with everyone when talking about PTSD. But you can start to get there by talking about things like service to others and recognizing that there’s something bigger, outside you. It doesn’t have to be a higher power, but there is something besides us, and part of how you recognize that is by serving others, and seeing the emotional feedback you get from them. And you might not even feel it yourself, I mean you probably won’t, but it’s a great thing to see  in somebody else.