Highs, Lows and Middle of the Road

Highs and lows. Everyone has them. For most of us though, we try to stay somewhere in the middle of the road.

Highs – A high can come in many forms. The unmistakable feeling you get when you look up at the sun on a cold but sunny winter day and you feel that warmth on your face. Seeing an old friend for the first time in years. Stepping back and observing your accomplishments from afar. A warm smile and affirmative wink from a trusted friend telling you without words that everything is good at this end. 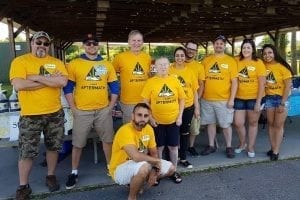 Camp Aftermath’s fundraiser at Karters’ Korners in Stittsville July 8th was a great example of a high that a lot of us got to experience. Months of prep work went into this event, and that prep work was evident in the success of the event. In that prep work though, came a real sense of camaraderie and teamwork. Everyone did their part, whether it was little gestures like showing up early, or bringing the team coffee. Helping someone carry a cooler. Setting up a tent when you don’t really know what you’re doing and there are no instructions OR there are instructions but nobody takes the 2 minutes to read them (haha it’s a guy thing).

The less obvious high you could experience is the boost you get when you see a coworker, a friend, or a family member show up unannounced. Meeting and chatting with media members who fully support your efforts and go above and beyond what you expected (thanks Kornicky). The even less obvious high with an event like this is the sore feet, tired back, and feeling of being on the go all day, but knowing you just accomplished something. You followed through with all your commitments. You dedicated a day off to an idea you believe in and you can take a moment to reflect on having completed this as a group, as a team, as a tribe. There are key players in this recent fundraiser that made it a success. Rather than single them out though, I wish to acknowledge everyone involved. Even those who couldn’t make it. We did this as a team, as a tribe. So congratulations to all!

A high isn’t necessarily an immediate thing for me. Sometimes it happens during a long drive home. The radio is down low, the roads are quiet and you have time reflect and to be one with your own thoughts. Farid and I had the pleasure of meeting some like-minded folks recently. One of whom we share an honoured military history with and hadn’t seen in quite some time as he has had some PTSD demons of his own. An informal meet and greet with Project Trauma Support founder Dr. Manuela Joannou out of Perth, Ontario was a promising first step towards a potential collaboration of efforts. Project Trauma Support (PTS) is a new Canadian program that addresses post-traumatic stress and operational stress injury in military personnel, veterans and first responders which falls in line with our efforts. They are doing some great work out in Perth and we look forward to continuing our conversations with them. Reflecting on the meeting our friend Rob Martin arranged, it occurred to me that this had a deeper meaning. Farid and I were able to reconnect with Rob and rekindle a friendship that never went away. Yet another high!

Lows – A low to me is like riding in the rain. It’s less than enjoyable with blurry visibility, but like life, sometimes you get caught in the rain. After a few minutes pass, you embrace the negative moments, deal with it, and things seem clear again. 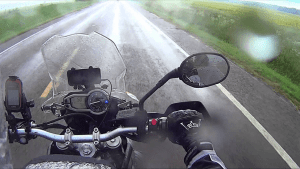 Friday July 7th, 2017 was a big low that will forever mark the ‘why’ for me. On that day, I lost my friend Steve who was taken too soon because he suffered from PTSD. Why did this happen is the question asked by Steve’s family. Things were bad, but they never thought it would lead to this. Why was Steve suffering so badly? I served with him. We deployed together, and lived the same patterns of camp life and experienced similar heartache and tragedy. Why with the same deployment history do I not suffer from PTSD the way Steve did?  Why would Steve not accept the extended helping hands that were constantly presented to him? Why did the ‘system’ not force more action out of the professionals assigned to help my buddy Steve? Why did a solid soldier, father, husband, son and buddy to so many lose his battle with PTSD? Why is the work we do right now and in the future so important? Because Steve can no longer ask the question why are these demons haunting me so? Saturday July 8th, 2017… mentally I rode out of the rain… Today was the Camp Aftermath fundraising event. I embraced the fact that my friend, my comrade, my brother will never have the opportunity to ride with me, rain or shine. My vision was clearing. I had to do my part and be a man of my word. Despite whatever was going on in my head and heart, this was exactly the reason why we do this work. So I pushed through my grief for Steve. That day, from time to time, I would smile and nod towards the sky and give an affirmative wink because today’s efforts are for you, Steve. Gone but never forgotten. Rest in peace my friend, rest.

This is a pic of my Canadian Military Decorations that were earned over the course of my 23 years in the military. It sums up a lot of what Steve and I shared and what makes this work we do all that more important. I wore these to honour Steve at his funeral, as a pallbearer. 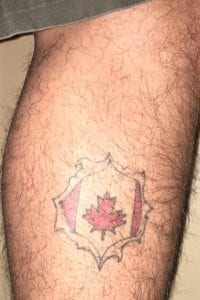 Funny story about this pic (excuse my somewhat hairy legs). Approximately 15 years ago, Steve and I found ourselves up in northern England doing some training with the military. We decided during some of our downtime that we wanted to mark this occasion with a tattoo (both our first).  We decided we wanted something Canadian (serving our country and all) and found this design of the Canadian flag ripping through our flesh. We had to grab Steve’s laptop and show the tattoo artist what the Canadian flag looked like so he could draw up the design. We were in a small coastal town and this artist was a local lad who doesn’t get out much (haha). Should have known right there that this was a bad idea, and the quality of the finished tattoo explains the rest!

Middle of the road – I mentioned this in my first blog. An August recce back to Costa Rica was a possibility which has now gained traction. Our flights are booked, itinerary thoughtfully laid out and a few new folks joining Farid and I for this adventure. This trip has been motivated and orchestrated by a wonderful soul I have yet to meet, Gail Nystrom, the executive director and founder of the Costa Rican Humanitarian Foundation (CRHF) established in 1997. CRHF has taken a vested interest in our efforts and has invited us down to Costa Rica for a collaboration of efforts with a wonderful amount of enthusiasm. The visit schedule has been set up by Gail (a busy woman who took time to do this for us) so that we can exercise a mock up of the philanthropic visits to sister charities in the country. I look forward to this chapter and look forward to meeting Gail, who has a positive energy and vibe that I can’t touch, but most certainly can feel.

Based in the rural community of Santa Ana, Costa Rica, the Costa Rican Humanitarian Foundation (CRHF) works to improve the quality of life of the most vulnerable populations in Costa Rica. The Foundation now manages more than fifty volunteer projects throughout the country, focusing on education, community development, primary and preventive health care, and extensive support services for women, at-risk youth and indigenous groups. All needs that the CHRF addresses are defined by the local populations, thus ensuring a high level of commitment to each of their programs. Visit their website to learn more.

August 24th, wheels up! Blog #3 will follow this trip. Thanks for reading!

In The News: Camp Aftermath looks to provide a holistic healing environment