Earth and Water: Healing at The Guardian’s home

We met the Boruca people during the Aftermath Costa Rica #Recce trip.

I was looking forward to seeing the tribe and learning a little bit about them, as well as seeing how we could incorporate such a visit with Aftermath’s philanthropic and therapeutic activities during Roto 0.  That’s not really what I left with though.

The Boruca people are different. I realized that only a few minutes after coming into their community.

Boruca is clean and quiet.  The people are proud and calm.  They take advantage of the tourism that their annual Feast of the Devils brings, but they don’t seem to seek out tourism dollars; the community has a small museum and the carving of traditional masks that brings in some money, but that’s about all the commercial activity that I saw.

Homes in Boruca have small TV sets and some have basic computers, but there is no materialism as we know it.  These people are happy with very little, and haven’t allowed centuries of colonization to either define them or assimilate them, in spite of situations similar to our own experience with residential schools and the forbidding of the use of native languages or customs. 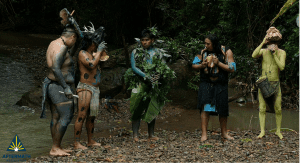 They took us, in the middle of a violent rainstorm, to the home of The Guardian of the Waters.  A small river, in the middle of which stood a boulder that has stood marked with spiral petroglyphs for at least a thousand years.  I don’t know if any archeologists have ever checked it out, but then again it is not an archeological artifact. It is a living representation of how these people haven’t lost their link with nature. It was the centrepiece and backdrop for their telling of their creation as a people, and was the anchor for our talks on healing. It was, in one word, powerful.  Sometimes you just have a sense that you are in a holy place, and this was one of those times. 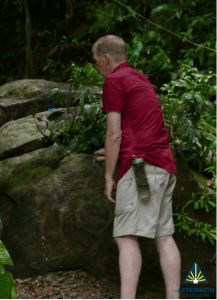 Ron with the petroglyph rock

Before we left the site, I asked permission to spend some time with this amazing rock, and it allowed me to process some of what these amazing people had told us.

I haven’t processed all of this totally, and it will take a lot of time and many more pages to do so; but I have an abstract of one of the things I learned from the Boruca.

To understand the totality of life, you must understand the totality of where we came from and the totality of the cycle of life.  Until you have experienced that, you are not complete.  In other words, to understand life you must understand death, while anchored to your origin.  Not necessarily as in dying physically, but dying spiritually or metaphorically. And as those with PTSD, we have done that. Many of us have witnessed death intimately, and as a result have died spiritually and/or emotionally. There is an opportunity in that; the opportunity to rise and be reborn with understanding that those not touched can’t have. And the opportunity to use that as a way of better understanding others, and of better teaching. During our visit, someone said that for the world to heal, the warriors of the world first need to heal. And the Boruca gave me one of the recipes; one they have lived for generations and which they gently continue to live and teach. I never thought of my journey as a gift – like most I considered it more of a curse. But maybe I was wrong. 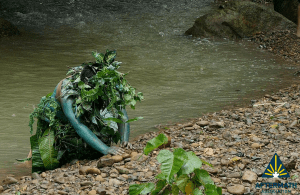 During the Boruca healing ceremony

I gave our Boruca guide a t-shirt, because that’s all I had. But I owe them much, much more.  I am honored that the Boruca people were so willing to share their story; I only hope I can repay them by sharing it and living it.

(We will be sharing video footage of this recce trip in the coming weeks. Stay tuned!)