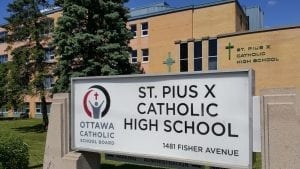 On November 1, 2017, Aftermath Association chairman Farid Yaghini spoke to students and faculty members at St. Pius X Catholic High School in an event-filled day that saw representatives of Ottawa Police, Canadian Forces and various trade organizations such as Skill Canada, Musicians and Pharmacists, all reach out to the students to explain their roles in the Ottawa community and in Canadian society as a whole. The students were very curious about Camp Aftermath’s approach of long-term PTSD management through active philanthropy.

Some students thought of volunteerism as something associated with punishment, such as community service. With the explanations and answers that were given to their questions, they soon realized that service to others and volunteerism was one of the oldest and simplest ways of self-healing and having a sense of purpose. The students reflected on the way they had individually felt after performing simple acts of kindness, such as holding a door for an elderly lady or helping someone with their luggage in an overhead compartment on the plane, and realized that they themselves had felt the power of giving and having a purpose. It was a wonderful learning experience for Farid Yaghini also; he was amazed by the interest and enthusiasm shown by the bright young minds at St. Pius X High School.