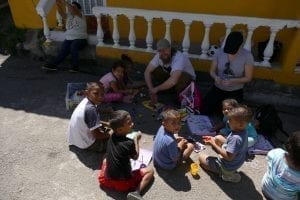 Painting with children in the streets of La Carpio during a volunteer day on the Orientation Trip 2018.

I have just returned from an amazing experience; 10 Days in Costa Rica with a group of wonderful volunteers from the Aftermath Association who gave their time and money freely to help others.

The destination, of course, was absolutely beautiful. The warmth of the sunshine, the scent of the ocean, and the sounds of the mountain jungles all filled the physical senses and relaxed the mind.

It was, however, the giving and receiving that I saw during the trip that made it truly amazing.

Normally we treat these 2 concepts individually; I give, you receive. You give, I receive.

But I was, once again, reminded that the 2 cannot be separated when they are done with compassion, and this phrase kept coming to mind:

Each of us Canadians, from different walks of life, chose to give our money, and irreplaceable time, to help the people of Costa Rica. We give, they receive. Simple. We left the ease and comfort of our lives up north, picked up a shovel, or some children’s toys, and on day one walked in to the heart of La Carpio, the impoverished, infamous ghetto in the city of San Jose.

Through our contact Gail, of the Costa Rican Humanitarian Foundation (CRHF), we were connected with a woman who had been living in this ghetto for many years. Her pregnant daughter, due to give birth on the very day we arrived, was living in a shack of tin and scraps of leftover building materials. So our volunteers went to work clearing garbage and debris from the property that had accumulated over the years from various tenants. In doing so they were able to break new ground to install reinforcing posts, ensuring the house would not crumble as it was destined to.

The volunteers gave their time and effort and she received safety and a bit more comfort for her and her child.  We gave, she received. If that had been all that took place it would have been enough, but of course, there was so much more to it because giving, and recieving, are both one. 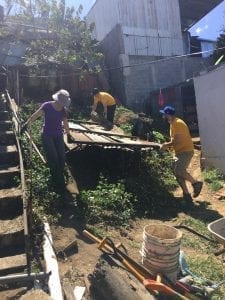 You see her mother, herself living in not much more than a shack, had been given the opportunity to come up with a project that we, the volunteers, could help with by giving our time and energy. She chose to give those precious resources to her daughter and granddaughter. In doing so she received the joy and well-being of her daughter, and the time wth her future granddaughter to spend in health and safety instead of worry.  By opening her home and her heart, to receive our help, she also gave us the ability to share in that joy.   Giving, receiving. Receiving, giving. The two cannot be separated when done with an open heart.

After the project was completed we headed back to the CRHF centre so that we, in turn, could receive. A beautiful lunch was presented to us, made, served, and cleaned up afterwards by the volunteers at the Foundation. Of course we could’ve easily taken our comparably great North American wealth and headed to some restaurant, but sitting down at their table and allowing them to give what they had, their skills, their time, their compassion, we were able to give them the opportunity to give, and so while giving we received.

This is, of course, the basis, the foundation, and the seed from which Aftermath Association was started. For myself, a veteran dealing with PTSD, this process of giving and receiving extended to and from each volunteer that day (thank you my new friends!), to each business or foundation with which we shared our story and who responded in kind throughout the trip, and to each Costa Rican we talked with, helped, and even received help from in times of need. (And there were several!) Each time I was allowed to give, I received even more. Each time I received someone gave and I know they received even more than they offered. Each time it was an exchange of joy, a sharing of a moment as our lives crossed each other’s path. Each instance another chance to lift the weight, and ease the pain. Each an opportunity to fulfill, and be fulfilled.  Each time the compassion that flowed helped me along in my healing process.

The lines become blurry, the feeling is wonderful. And powerful. And healing.