Throughout my life, the idea of what family means to me has constantly changed and evolved.

As a child, family was limited to my parents, sisters, uncles and so forth.  These people were clear and present in my life and I depended on them for everything.  Their love was unconditional, and constant.

When my parents and I immigrated to Canada, the definition of family expanded to include other refugee children living in my apartment complex who were also figuring out their new lives.  We were of different races, religions, languages, and cultures, but we all shared the same goal of trying to fit into Canadian society while at the same time respecting, and not forgetting, our past, which our parents struggled to instill in us.

After I joined the military, the definition of family expanded again to include the fellow soldiers who I served with.  Being posted to CFB Petawawa, after living most of my childhood in the suburbs of Toronto, was a culture shock but I was lucky enough to meet some amazing people there. Sharing hardships have a way of forging strong bonds with people and the military provided plenty of opportunities for those bonds to be created. Through countless military exercise in Canada or deployments abroad, the military provided me with another family, one which provided loyalty not only by words but by actions.

Upon retiring from the military,  after several years of active service, I sensed a feeling of loss. Though I later became a father to a daughter who is a sense of great inspiration and love in my life, I felt like I had lost my military family. This sense of loss left me with a lack of purpose and belonging.

However, I regained that sense of purpose when I became part of my new family, my Aftermath Association family. I am honoured to be part of an amazing group of hard-working individuals, including former and current serving military members, public servants, police officers, lawyers, university professors, and mental health and medical professionals. They have given me a renewed sense of purpose, and they have replaced the feelings of helplessness and despair that I had upon leaving the military. I depend on them and love them like all previous groups which I call family. 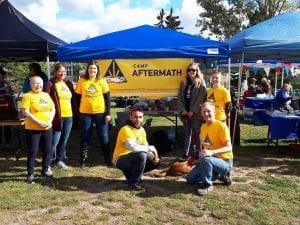 I once read a quote which said that we should focus on surrounding ourselves with people who “fan our flames”, meaning people who support and love us and motivate us to pursue our dreams and endeavours. When I take stock of my life today, I see that I am one lucky guy: everywhere I look, family surrounds me.